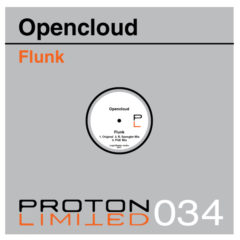 Opencloud starts off 2011 with their single Flunk, which is a minimal big beat techno tune, while on remix duties is Reggie Spengler and Panorama Groove Express. Reggie brings a tripped out dub of the original that should take people on the dancefloor to another dimension, expect more from this cat. Panorama Groove Express shows another side of techno that will get the crowd moving. Another solid release.