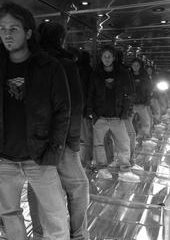 Born in 1984 in Buenos Aires, Argentina, Javier Solans, son of musician parents, took different musical currents passing through bands like Led Zeppeling, Krafwert, Queen, Pink Floyd, Level 42, The Beatles, and so on. By the year 2000 began to take an interest in electronic music and mixing techniques, which also had their first contacts with dj .. s and producers of electronic music as Saint Germain, Hernan Cattaneo, Mark Farina, Derrick Carter, Roger Sanchez, Daft Punk , Chemical Brothers, Fatboy Slim, Sasha, John Digweed, Etc. It is for those years when it ventures into PC programs to make their first mixtures. For 2005 experiencing for the first time in living the art of manipulating records, which gradually began to play at various private parties. Since the end of 2006 completely immersed in the environment under the scene, he began to play at various bars and bowling alleys of the Federal Capital, giving start to his career as a DJ. Every job has bear fruit, it is then that residing in 2008 for the first time a cycle of electronic music, called amitié which has and will have guest dj .. s luxury. Begins this year, a new stage in their training, taking the production as a means of expression. Drawing his first EP in the stamp-Nútené Rec in conjunction with Martin Gioia. The idea is to experience their live sets sounds thin and defined, varying within the Minimal, the House, Electro and Techno, then to achieve a harmony and cadence in line to each situation…. .. ..