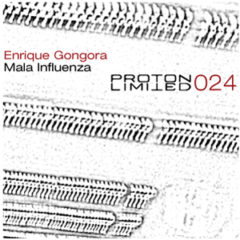 Fresh into 2010, Proton Limited comes with a relese from up and coming Enrique Gongora, who hails out of Mexico City. Mala Influenza is his first release with Proton Limited, and is a big bass tech house builder that is twisted up as it moves through time. On top of the original are three great remixes from Alvaro Ernesto, Eduardo Rossell, and Gog. Excellent release to start off 2010!!