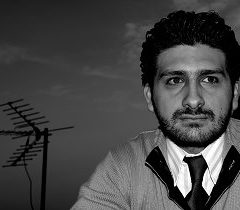 Eduardo González aka TNAO started in the world of music at the age of 10, when he began matching disco and industrial vinyl’s that belong to one of his uncles, this impulse him for the liking and passion for the music.

7 years ago he started his career as a Dj playing and mixing genres such as Deep House, Minimal House, Filtered House and Tech House, as a consequence of his liking for Disco Music which represents great part of his musical influence.

Producing since 9 years ago in an empirical way, his creation begins with techno rhythms (135 & 140 bpms) within a hard techno tendency that was invading his life between the years 1999 and 2000; he managed to meet different software and hardware’s and other ways to create music in an analogous and digital way.

In 2004 began a new era of rhythms, proposing basic structures based in minimal techno, the melodic depth and the new sounds built in a digital way.

In 2008 he built up his minimal tendency with his firsts releases in Europe and this year begins with more challenges in his career as a producer with musical and melodic arrangements based in Dub, Ambient, Tech house, House, Funk, Latin Jazz and Jazz, with changing structures focused in an progressive way to offer different atmospheres in a same track.