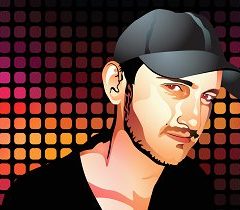 After playing on several parties in Salonica,Athens,Kozani and having some hi rated nights on islands like Skia8os,Thasos,Mukonos and more James Solid(Dimitris Pavlidis) realized that spinning records is just the thing that fills his soul and mind.

Being a resident dj at club Nono in Xalkidiki and playing every night in front of more than 1000 people he prooved that he is the right guy that know how to shake a dancefloor showing his high level in mixing different genres from house to progressive and between some dirty electro showing that he is not affraid to reach in his sets even techno.

James Solid is also the man behind the newborn label Solid Fabric Rec. & “Body Language” radio show which is broadcasted in many radio stations around Europe including superstar guest djs like Mason,2Elements,Mil&Sugar,David Vendetta,BeatThiefs and many more.

These days he is on the studio working on several projects and also on the official Solid Fabric Rec website and release catalogs establishment as one of the new forthcoming leading labels in the dance industry.