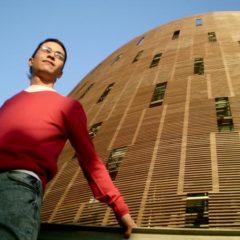 Emidio Falconi a.k.a Baffa is considered to be one of the most important electronic talents of his home country Venezuela, well known for his excellent technique and innovative musical taste, his sessions offer a trip thru the best sounds of today’s electronic dance music, combining always different textures between House and Techno.

As a Dj, Baffa already has 9 years of experience over his shoulders, in all this years his talents has taken him around Venezuela’s biggest cities, and to other countries as Mexico, Colombia and Ecuador. Has shared decks with many international big names, such as: Loco Dice, Adam Beyer, Marco Bailey, Monoblock, Patrick Skoog a.k.a Agaric, Holgi Star, Dj Emerson, Paul Mac, Matias Muten, Z@p, Delete, Leo Fernandez a.k.a Neutrino, Israel Sunshine among others.
Well aware of the advantages of knowledge; he enrolled in the T.A.S (Caracas-Venezuela) to pursue a title on Audio Engineering, title that he obtained in the year 2001.

These studies allowed him to develop a side career as an Audio Engineer. Involved more specifically on the Post Production and Sound Design side of the business; he has worked for several big brands and networks such as: McDonalds, Coca Cola, Pepsi Cola, General Motors, Sony Entertainment Television, HBO Ole, and DirecTV, among many others.

Nowadays Baffa centers his attention to his career as Dj and Producer. So far he has managed to release music on many respected labels around the world such as: Stimulus Recordings, Flux Recordings, Safari Electronique, Kailash, *Cutz, Back/ash, Acktivism Recordings and Capsula. Excellent productions that have gained the support of key players such as: Richie Hawtin, Karotte, Sasha Carassi, Mark Broom, Umek, Dj Misjah, Paul Mac, Ben Sims, Ade Fenton among others.