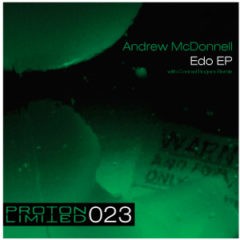 Andrew McDonnell goes dark and dirty on this release with its tripped out breakdown and massive bassline of Edo, while Conrad Rogers brings a giant loopy techno remix number that kills the dancefloor. While oscillator 1 comes in as a progressive house B Side to show the diversity of this up and coming producer. This release should not be missed.