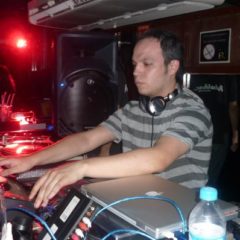 Leandro Dutra AKA Lea-D, has been born in Buenos Aires, Argentina. His passion for music began at an early age, influenced by Pop and the rhythms of Early 80’s. At the age of 13, he discovers new sounds coming from Europe and United States, groups and producers like Chemical Brothers, Underworld, Kraftwerk, Sasha, John Digweed and Orbital life-marked his destiny as a musician.

In 1999 he decides to move to the other side of music and began composing it, aided by different computer software’s, without any previous music-theory guide, starting a self-taught game. Later on 2002 he starts playing keyboards and synths in a rock/pop band called Fanny Ardant. They played at many different festivals and events in Argentina. As the time went by, he has been invited to integrate different rock and pop groups. As well, he decides to musicalize events and concerts of his band creating different atmospheres with his music before the other members of the band go up to stage
In 2004, with the mind cleared and the eyes (ears) opened, he enters in the Musical Producer career at the EMBA (Escuela de Música de Buenos Aires).

Once he finished his musical producer carrer decides to lunch his career as a DJ, playing in the beginning at private parties and, after a few months, as a resident of local clubs, where he gets a great experience about how to manage a crowd in a dancefloor. Playing later on different Clubs and events around Argentina, he decides that it’s time to show his skills not only as a dj but also as a producer of electronic music, he start to release his music on different labels around the world with hugh support by recognized djs and producers, leading his tracks on rankings like “Realease Promo”, “Richmond Promo Pool”, “My Promo Pool”. Pristigious labels like Proton Records, System Recordings, In Deep Records, Witty Tunes, Brown Eyed Boyz Records are just some of the many who have relied on this prestigious high quality producer in the highly competitive global electronic scene.

His sets can be heard in most of the importants radios like Proton Radio, Frisky Radio, Danceradio.gr, Pure.fm. His productions gets huge evolution also throughout the years, now his tracks are wanted by top labels around the globe and playing by djs like Hernan Cattaneo, Eelke Kleijn, Steve Mac, Derek Howell, Randall Jones, Thomas Penton, Matt Rowan, Ricky Ryan and the list keeps on and on. 2010 finds him making a lots of national and international tours wich have taken him to Brazil, Uruguay, Mexico, etc and with too many more gigs in another countrys to be announced.